Back to page
Add topic 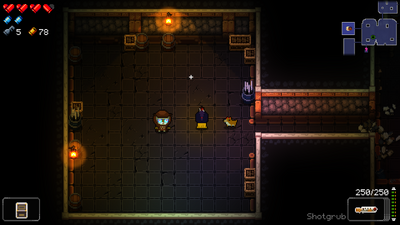 This is a new npc i accidentally found after the gungeons and draguns update when i took damage. I was on the second level and he said that he entered the gungeon after I completed something, i forgot what he actually said though. He gave me heavy boots than sent me on my way. He said his name was Monster Manuel.

Had Several NPCs show up twice in same level. Noteworthy?[]

Had Vampire NPC show up twice in same level. Once in a random room. Once in shop. Is it worth mentioning?

Also, had Bullet guy show up twice when he spawned in his own room, and in the demon face.

I added the new googly eye mimic chest NPC... It was necessary[]

But...I think it would be better a different image...I simply cut a screenshot, I don't know how do people did the other npcs' images

There's no further info on the Old Man NPC, does anyone have any information on him? Like where to find him, etc. I'd like to add it to the table if possible or create a page if anyone has any info on him. --Sirtimmothybrentwood 05:54, 30 April 2019 (UTC).