Starpew is a gun that fires droplets of water. The gun has multiple levels of charge, and each level increases the number of droplets fired:

It consumes 1 ammo per shot regardless of how long it is charged. 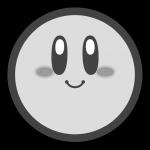