From Enter the Gungeon Wiki
Jump to: navigation, search

Objects are environmental items found within rooms of the Gungeon. Gungeoneers can interact with objects to affect combat.

Barrels contain elemental goop. Interacting with a barrel will roll it and leave a trail of goop. Bullets cause barrels to explode, splashing the area with long-lasting goop.

Barrels can be rolled into corridors and other rooms. Barrels do not roll into pits, but stop right at the edge of the pit, making it difficult to roll them anywhere else. Enemies, particularly Bullet Kin, tend to be distracted by rolling barrels and shoot them.

Water barrels in the Keep of the Lead Lord roll slower than other barrels, so that maneuvering them into the Fireplace is practical.

Tables can be flipped over to block bullets. During the flipping animation, bullets near the table will be cleared, similar to Blanks or explosions. After flipping a table, the player will become invincible and absorb bullets for a few frames. Afterwards, the table can be pushed around, and will be destroyed after taking enough damage. Tables also absorb bullets when destroyed, in the same manner as when they are flipped. Bullet Kin and several of their subspecies will also flip tables and use them as cover themselves.

Tables can be slowly pushed around. One table can push another, which significantly slows the Gungeoneer.

Tables are unaffected by fire.

Coffins are found in the Hollow. They are similar to tables, but can only be flipped on their long ends. They have a chance to spill a cone of poison goop in the direction flipped. In all other regards, however, they are functionally similar to tables, and will activate Table Tech effects and count towards the Rage Mode achievement.

Clutter is a wide variety of minor objects found throughout the Gungeon, ranging from flowers to crates to skeletons. A few kinds of clutter can be found atop tables. Some clutter objects will stop a single bullet before being destroyed, while others do not obstruct gunfire. All clutter breaks instantly on contact with a Gundead creature or Gungeoneer. Clutter has a very tiny chance to spawn a Gun Fairy when broken. If the Pot Shots challenge is active, clutter objects have a chance to fire bullets at the player as they break.

Alone among clutter objects, stalagmites in the Black Powder Mine absorb multiple bullets before breaking, and block the movement of Gundead.

Braziers can be found as early as the Keep of the Lead Lord, but are most commonly found in the Forge. They can be flipped and leave a trail of fire. Braziers do not provide cover, don't clear projectiles, and don't interact with Table Tech passive items. Rolling through a brazier destroys it without damaging the Gungeoneer. Braziers also block enemies like Lead Cubes in the Forge.

Cursed Pots have a large purple aura around them. If the player stands in the aura for too long, their curse will increase by 1 and the pot will break. Cursed Pots can be broken by shooting or touching them. Cursed pots do increase the count of killed enemies, useful for weapons like the Polaris.

While their aura may visually extend beyond walls into other rooms, the actual curse effect does not.

Cursed Pots affect the player while teleporting into a room, although this is only an issue in Challenge Mode

Oil Lamps can be found mounted to the walls of the Black Powder Mine. Upon being shot, they will break and leave behind a puddle of oil. Explosions and fire weapons ignite the oil, dealing significant damage to walking enemies.

These can be exploited to have a technically infinite source of ammo while using the Gungine, because of its ability to refund all ammo used in a clip when reloading over puddles. (Oil / Poison / Water)

A TNT barrel inside a Minecart.

Minecarts are found in the Black Powder Mine. Interacting with a minecart lets a Gungeoneer ride along minecart tracks. Bullet Kin, Red Shotgun Kin, and Executioners can also ride minecarts.

Additionally, some minecarts can contain explosive barrels or mechanical turrets which fire at the player. These turrets can be destroyed with explosions, after which the minecart is free to be ridden.

If the player dodge rolls while not touching any of the movement keys, then they will not exit the minecart and will only dodge roll. If the player is moving, they will dodge roll out of the minecart; if they touch another cart in the process, they'll automatically ride it. This technique is used to acquire the Arcane Gunpowder in the Black Powder Mine.

Minecarts that the player is riding in are not affected by friction; a moving minecart will automatically continue to move along the track until the player exits it.

In co-op, two players can occupy the same minecart, but only one player will be able to steer it. 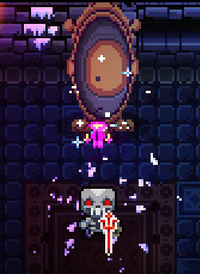 The Monster in the mirror.