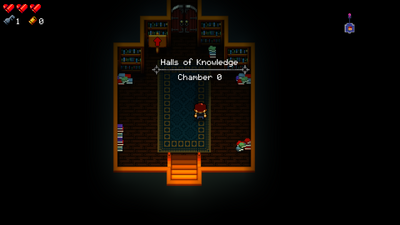 The Halls of Knowledge is one of the Chambers in the game Enter the Gungeon. In this tutorial/beginning level, Ser Manuel informs you about the basic controls and features of the game.

After the first teleporter, go up one room and left two rooms. Defeat the bullet kins and find a crack in the lower wall. Use a blank near the crack to reveal a hidden room containing Old Knight's Shield, Old Knight's Helm, and Manny's corpse. If the player loots the shield and defeats the boss, Manny will claim that the player now knows his secret and reveals a backstory.